The ancient civilisation was a society of bugs that existed in the distant past before the Kingdom of Hallownest was founded.[1] It originated from or near the Abyss but later expanded to the entire land of Hallownest.[2][3] This civilisation did not devote its worship to any lord or power but instead worshipped the Void itself.[4] 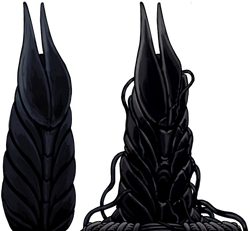 Several Soul Totems can be found in Deepnest in the Sharp Shadow area. These Soul Totems have Void tendrils attached to them which appears to have corrupted them, forming the Sharp Shadow Charm. This Charm contains a forbidden Spell that transforms shadows into deadly weapons and bears a resemblance to the shape of one of the Soul Totems.[6]

Relics created by the ancient civilisation, Arcane Eggs are stone eggs that contain knowledge hidden within. Most of these eggs are found in the Abyss.[1] An egg is a perfect protective form. While the kingdom of Hallownest used stone journals or tablets to store information, the Arcane Eggs have their records stored within their multiple layers.[7]

Extracting this knowledge is difficult and painstaking work for relic seekers such as Relic Seeker Lemm, making them only able to access the outer layer of the eggs in fear of damaging them.[7] Some relic seekers claim that Arcane Eggs have some sort of will and that each is drawn to a specific bearer.[8] 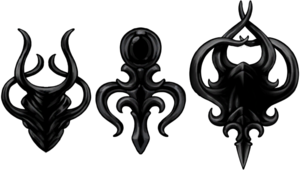 The Void Idol is a rare artifact belonging to the ancient civilisation. Its Journal entry is obtained after defeating all bosses in the Hall of Gods on Attuned difficulty. Defeating all bosses on Ascended and Radiant changes the state of the idol. The first state of the Void Idol contains only a drop of Void.[4] The second state has volatile Void that writhes within.[4]

On Radiant difficulty, the Void Idol's spires are twined in a unified form, and it contains a large amount of perfectly still Void.[4] This final state is similar to the state of the entire Void after it has been unified by the Knight when they acquire Void Heart.

These ancient remnants have no inherent connection to present-day Hallownest, but it is unknown if they are related to the ancient civilisation.

Temple of the Black Egg shell